The All New Porsche 911 Cabriolet Is Finally Here And It Looks Hotter Than Before !

Six weeks have passed since Porsche launched the latest iteration of the iconic 911 coupe, and now we have another great news for the Porsche fanboys to rejoice at! Porsche AG has now given the 2019 porsche 911 convertible a grand entry into the global motoring arena. The soft top version unsparingly hosts all the modern tech and equipment of its coupe sibling, alongside a much quicker and more efficient hydraulic mechanism for operating the roof.

The 911 boasts of a rich and long tradition with the first prototype being unveiled in September 1981, at the International Motor Show (IAA) in Frankfurt. It had then taken hardly a year for the folks here to witness a convertible version of this sportscar set even more fire running through the nerves of enthusiasts across the globe. 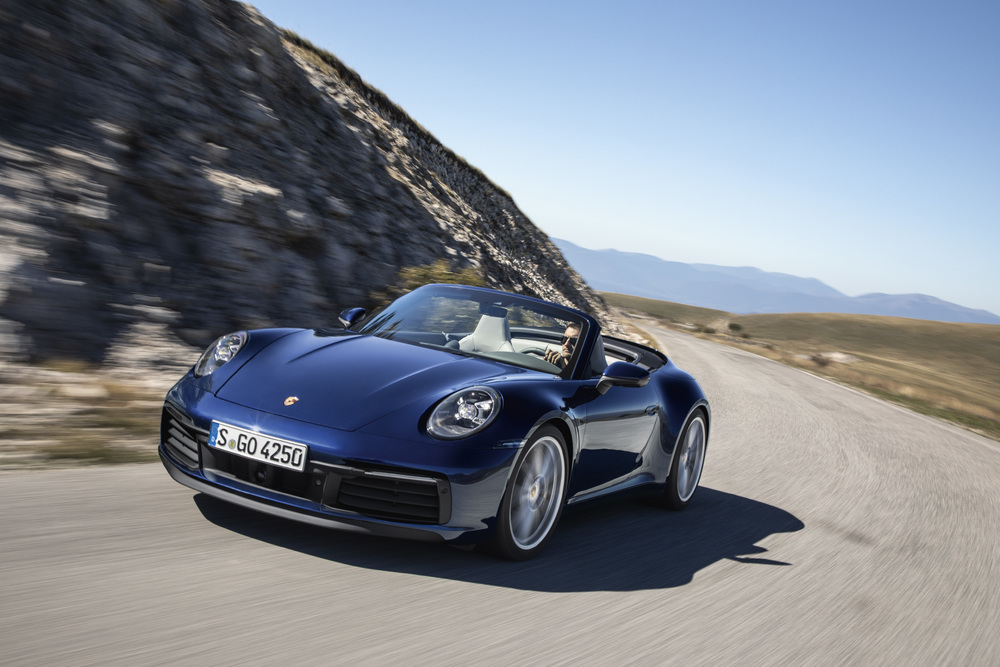 The latest generation is evidently a fair reincarnation of the original 911 DNA into a 2019 shell that packs the latest tech and safety gear onboard but is still greatly retro styled! It has all the modern looking body lines of the 2019 porsche 911 carrera coupe, all weaved neatly into a gorgeous body that is evidently retro looking and thoroughly 911ish! The car looks wider, more self-assured and altogether more muscular than its predecessor. It gets wider wings and massive 20-inch wheels at the front and 21-inch mammoths at the rear. The RWD models now come with the same width as the existing AWD models. A 44 mm longer rear axle, a 45mm wider front and the forward extended bonnet with a distinctive recess in front of the windscreen, all make the car look bolder on the roads than its predecessor. The retractable spoiler at the back has grown a fair bit in width and now has a continuous seamless light bar. Save for the front and rear sections, the whole of the outer skin has now been made from Aluminium.

The roof retracting mechanism also sees a great improvement in the new generation. The fully automatic soft top has integrated along, a glass rear window. It also has magnesium surface elements known as bows, intended to offer added strength and thus prevent the ballooning of the roof at high speeds. Thus the roof of the 2019 porsche 911 convertible can be opened and closed at speeds as high as 32 mph, in a much lesser fraction of time summing up to around 12 seconds- thanks to its new hydraulics. The car also comes with an electrically extendable wind deflector that keeps your necks safe from the wind impact. 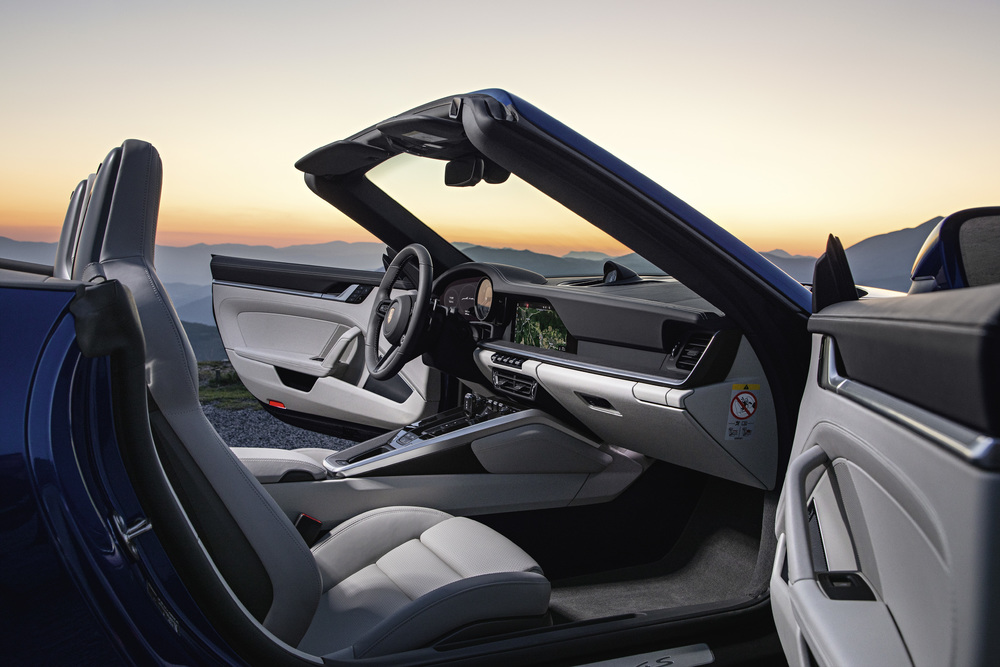 The interior seems suave and imposing with clear, straight lines and recessed instruments defining the dashboard. The dashboard covering the entire width between the two horizontal wing levels reminds us of the original 911. A centrally positioned rev counter, two thin, frameless freeform displays are all onboard, to serve the driver with all the information that he needs. The car-maker’s iconic Porsche Communication Management (PCM) gets a huge 10.9 inches display in the 911.

Porsche Works Secures An Excellent Second Place In Their…

The 2019 Porsche 911 Carrera S cabriolet also marks the world premiere of Porsche’s ‘Wet mode’. Offered as a standard fitment on this car, ‘Wet Mode’ detects water on the road, preconditions the control systems accordingly and warns the driver, who can then opt to set up the car with a focus on safety, by simply pushing a button or using the mode switch on the steering wheel (Sport Chrono Package). Besides this, the 2019 porsche 911 convertible would also warn you against the risk of collision with vehicles, pedestrians, or cyclists, and can even go for an automated emergency braking, if required.

Other interesting techs onboard the car include the likes of Night Vision Assist, with thermal imaging camera, as well as adaptive cruise control with automatic distance control, stop-and-go function and reversible occupant protection.

Talking about the 2019 porsche 911 carrera specs, under the hood is a 2981 cc (3.0L) charged 6 pot boxer engine that lets out as much as 450 hp at 6500 rpm and 530 Nm (between 2300 and 5000 rpm).The emissions have seen as big a shave-off and the bump in drive efficiency, thanks to the improved injection process. The turbos and charge air cooling system have also undergone fair tweaks. The car gets a new 8-speed dual clutch transmission and does the 0-60 sprint in a mere 3.9 seconds (Beef it up further with the optional Sport Chrono Package and the figure drops to 3.7 seconds). The car can make figures as big as 306 appear on its speedo!

The torsional rigidity of the new Porsche 911 Cabriolet has also been increased by the new engine mounting position. The car also features Porsche Active Suspension Management (PASM), something pleasingly strange for the series. Harder and shorter springs, more rigid front and rear anti-roll bar and a 10mm lower chassis, all give the new 911 cabriolet the thirst for speed that it deserves.

Did you miss our Porsche Macan story? Read it here …

The Porsche Macan S 0-60 Comes In Just 5.1 Seconds, Too Obsessed With Breath-Taking Performance!

The Lamborghini Sales Figures Of 2018 Will Definitely Shock You!