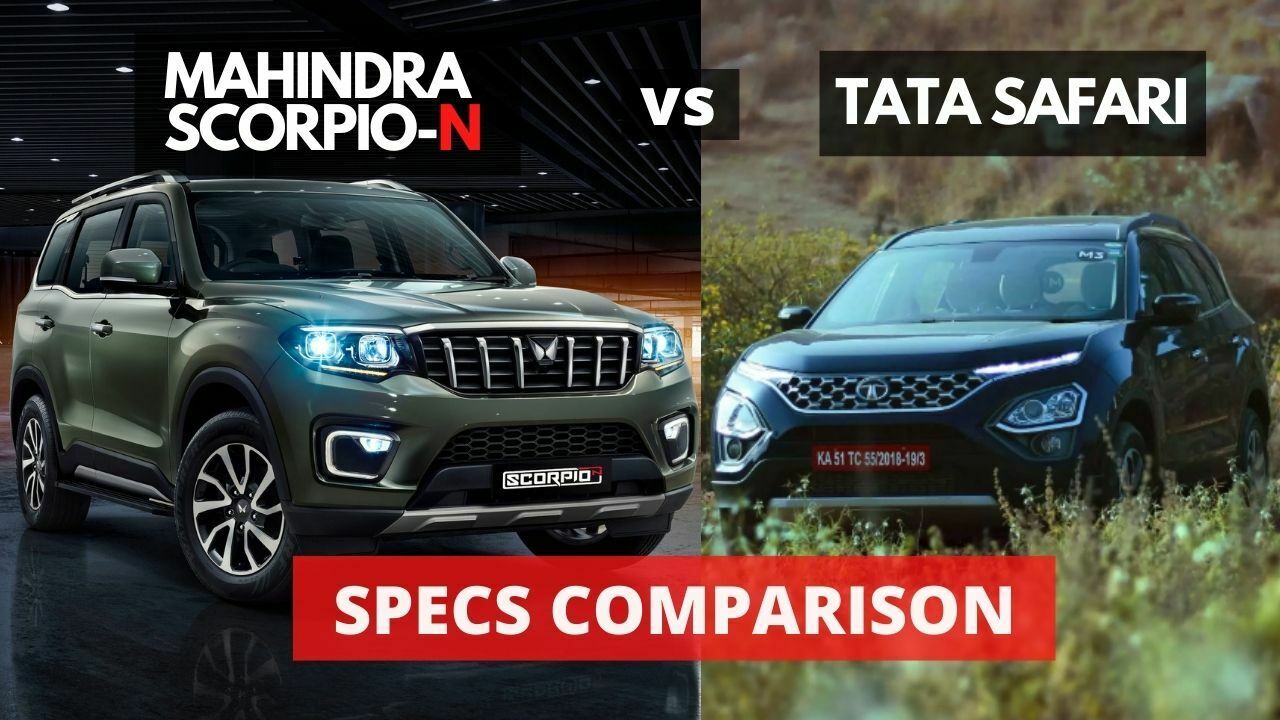 Mahindra has launched the new Scorpio-N at super-aggressive prices. 2022 Scorpio, as a package is, absolutely compelling and would surely put up a massive fight in the D SUV segment. Going by its prices and the Indian roots, one of the strongest rivals to the Scorpio N could be the Tata Safari. Let’s compare these in terms of specifications. But before we do so, please take note that the new Safari is underpinned by a monocoque chassis while the Scorpio-N is based on a ladder-frame platform, and thus the A-B comparison would have its own limitations and Grey areas.

Both the Scorpio N and Safari are good-looking SUVs. They have tall, butch, and imposing stances. The Scorpio N gets a design that’s way too loud about it being a ‘Scorpio’. It looks like an unmistakable evolution of the OG Mahindra Scorpio design. The key design highlights include LED headlamps, bold grille design, C-shaped DRLs integrated into the front bumper, stylish vertical tail lamps, functional roof rails, and stylish alloy wheels.

The Safari, on the other hand, looks sleeker and gets a design that bears an uncanny resemblance to that of the Harrier, on which it is based on. The vertical split headlamp, stylish tail lamp, and catchy side profile designs are to be loved on this SUV. The roof rails here, however, are show-pieces and incapable of any serious load-bearing. Diving into the dimensions…

As the figures suggest, the new Scorpio is significantly wider and taller than the Safari. It thus looks more rugged and brawny than the Tata. The overall length, however, remains identical for the two. The ScorpioN also has an advantage in the wheelbase. How this would reflect in the overall dynamics and body balance, is something we would have to find out in our first-drive, which is yet to happen!

Not much can be commented on this until we get the Scorpio N for a detailed road test. But, going by our first impressions of the cabin experiences in these vehicles, it is definitely the Scorpio N that scores for kit levels and the ‘touch and feel’ qualities. Though a rather personal thing, I find the new Scorpio’s cabin to have better aesthetics. It looks good and feels premium and considerably more up-to-date than that of the Safari. In terms of features, the Scorpio 2022 seems to offer more than what the Tata does.

The entertainment package consists of an 8.8-inch touchscreen and 9-speaker JBL audio on the Safari and a larger 10.25-inch touchscreen and a 12-speaker Sony 3D immersive sound system on the Scorpio N. Both the cars get motorized driver seats too. Two notable differences between the two would be the sunroof and parking brake. The Safari gets a full panoramic sunroof while the ScorpioN settles down for a fair-sized regular sunroof. Also, the Mahindra gets a conventional parking brake (which could be much more fun than an electronic unit!) while the Safari features an electric park brake.

The Safari currently holds the title of having the most comfortable third row. The new Scorpio seems to have slightly lesser space on its last row. However, we can give you an authentic opinion on this only after getting to drive one in detail.

As mentioned earlier in the article, the Scorpio is a ladder-on-frame SUV while the Safari is underpinned by a monocoque chassis. This would be evident in the overall dynamics of these SUVs. Talking of powertrains, the Scorpio-N offers the choice of a 2.0 mStallion turbocharged petrol and 2.2L mHawk diesel. The Safari, on the other hand, is available with a 2.0L diesel alone. Several reports suggest that Tata Motors is prepping a petrol version of this SUV. Anyway, comparing the equivalent diesels for now…

The Scorpio-N seems to be torquier than the Safari, and going by the general traits of the mHawk engine, the new Scorpio should be slightly better than the Tata in overall performance. Also, the Safari is a front-wheel-driven vehicle. The Scorpio-N on the other hand gets 4WD on top-spec variants (an advanced 4XPLOR terrain management system is on offer too) while the lower trims get RWD. (RWD could offer more fun on an SUV than FWD!) The Scorpio-N could simply take more abuse, scale more terrains, and be pushed to extreme conditions, than the Safari.

Mahindra has revealed the prices of the manual variants of Scorpio N. Priced in the 12.49-19.49 lakh bracket, the Scorpio N has a massive pricing upper hand. The Safari is currently priced between 18.12 lakh and 26.14 lakh, ex-showroom. In this scenario, the Scorpio variants could make much more sense than the Tatas.

The Scorpio N automatic prices and the 4WD prices are yet to be out. But going by how aggressively Mahindra has recently been pricing their products, we expect wonders with these as well. The automatics ending below 24 lakh, ex-showroom could mean epic VFM proportions. The Safari automatics are retailing in the 21.31-27.65 lakh price range (The Safari XZA Plus 6 seater AT Dark Edition is much pricier, at Rs 29.30 lakh, ex-sh).

ALSO READ: Z101 SUV To Be Called Mahindra Scorpio N: Everything We Know About It!