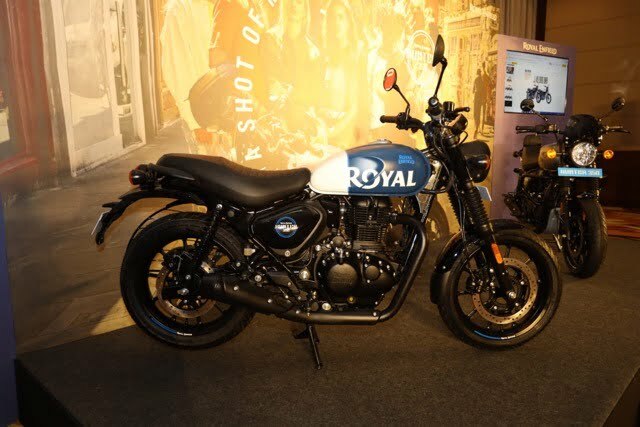 Royal Enfield has launched the all-new Hunter 350 in Kerala. The manufacturer has given the motorcycle a very aggressive pricing, making it appealing to a wider audience. The Hunter 350 is priced from Rs 1.49 lakh (ex-showroom, Kerala) and is available in two different variants- Retro and Metro. The range-topping Metro gets 2 further classifications within- Rebel and Dapper. A total of 8 different colorways are available.

The Hunter is a remixed roadster with decent doses of modern and retro cues in its design. It remains visually distinct across its variants and variations. The Retro gets 17 inch spoke wheels, tyres with different patterns, 300mm front disk, 6 inch rear drum, single-channel ABS, a rather basic digital-analogue instrument cluster, basic switchgear, and single-tone colorway for the fuel tank.

Royal Enfield has also launched an extensive array of official accessories for the motorcycle.

Royal Enfield has given the Hunter almost the same mechanicals as the new Classic and the Meteor. It is built on the new-age platform co-developed with Harris Performance, and draws its power from the new J series engine. The throttle response and engine map have been changed to deliver a more peppy performance. The 350 cc, single cylinder, air-cooled engine produces 20.2 hp and 27 Nm and comes mated to a 5 speed transmission.

Royal Enfield Hunter 350: Why Is It So Special An RE?

Here are 3 smart things that make the Hunter 350 stand out from other Royal Enfield motorcycles:

Kerala continues to be one of the key markets for Royal Enfield. Hunter 350 has received overwhelming response from the state. RE reveals that Kerala has recorded the most number of bookings for the motorcycle in the country. With its aggressive pricing and the nature of the crowd here, Royal Enfield has high chances of converting a lot of 250cc aspirants to this product.

The market response for the Hunter 350 has been epic. Bookings are soaring as you read this. However, Royal Enfield guarantees that minimal delay in deliveries would be ensured, as they already have good number of motorcycles produced and supply-ready.