2019 BMW 7 series finally gets launched in India at a very interesting price. Locally produced in the car maker’s Chennai facility, the new 7 is available in both petrol and diesel variants. The new BMW 7 Series India bookings are now open in all BMW dealerships across the country. The prices for the all-new BMW 7 Series range starts at INR 1.22Crores.

BMW India has for the first time in its history, brought in a plug-in-hybrid version of the car, the 745Le xDrive! The 745Le xDrive packs added grunt and better efficiency with the use of an electric motor for assisting its petrol mill.

There are variants on offer with ‘M’ ‘X’ and ‘i’ badges. That essentially means that the carmaker’s renowned ‘xDrive ‘ all-wheel drive system finds a place in the new BMW 7 series India lineup as well. There are two AWD models- BMW M760Li xDrive and the hybrid BMW 745Le xDrive, being offered here, that come in via the CBU route. 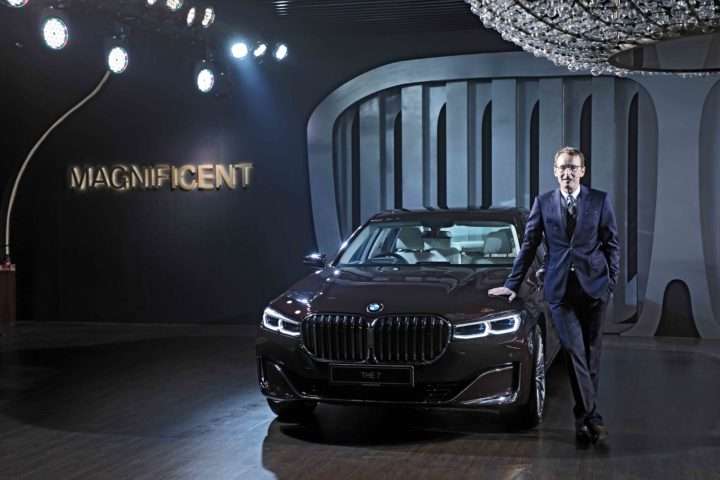 Dr. Hans-Christian Baertels, President (act.), BMW Group India said, “The BMW 7 Series is our ‘flagship’ – a car that takes the story of luxury forward into the future. The 2019 BMW 7 Series is a completely new car, be it in terms of design, the level of luxury or its advanced technological offerings. A grand imposing presence, opulent interior, unparalleled comfort and superlative performance – the new BMW 7 Series is a place where technology becomes emotion.

As the epitome, it represents the best BMW has to offer. Symbolizing BMW’s pioneering lead in future mobility, the ‘7’ is also being introduced as a plug-in-hybrid variant in India for the first time, along with a range of powerful petrol and diesel engines. We are confident that the new BMW 7 Series will comfortably surpasses all expectations.”

There are, as expected, two trims- the Design Pure Excellence and M Sport, on offer on the new 7 lineup. While the DPE highlights the luxurious persona of the sedan with chrome elements inside and other touches of premiumness all around, the M Sport trim imparts a thoroughly sporty air to it, good enough to stimulate massive adrenaline rush.

Below is the variant-wise price listing of the new 7 :