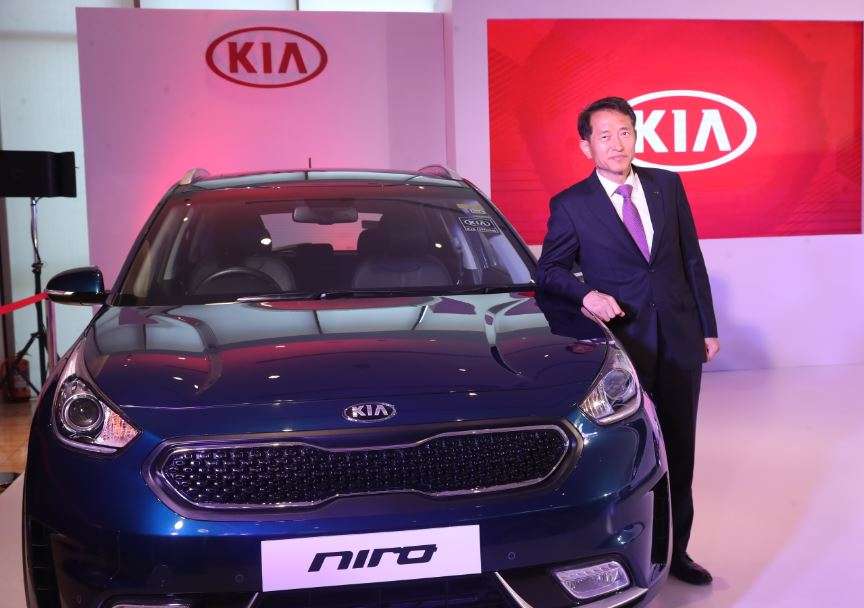 It’s been some time since Kia Motors first came up with an official confirmation of their Indian entry and all of us have been way too excited ever since. The car maker has now shed more light on the same and has also given a quick glance of two of its models- the Niro and the Carnival , which we seriously wish, made their way to the country!

Kia’s first product to go on sale in India would however be the production guise of the SP2i concept that had amassed massive appreciation at the Delhi Auto Expo, where it was first showcased at. The carmaker sees India as a highly promising market and has plans to rank amongst the top 5 automakers in India, within three years. Kia Motors plans to go for a rapid expansion of its portfolio in the country, hoping to host at least 5 models by 2021, by launching a new model every 6-9 months, after the launch of the first car.

When simple straight lines get turned into a Masterpiece, you see Kia’s Power to Surprise. Are you ready for Kia? #KiaInIndia pic.twitter.com/Luljhm2eET

The production guise of the SP2i concept is hoped to break veils soon. Essentially a ‘made in India, for the world’ car, the SP2i would be manufactured in the car-maker’s Anantapur facility in Andhra Pradesh. Flaunting world-class quality, finest design and state-of-the-art technology, the production SP2i (Let’s call it so for the time being, as the official name is yet to be disclosed) is hoped to set a new benchmark in its segment. The design of the car is said to have drawn inspiration from the Royal Bengal Tiger, a claim well justified by its highly pronounced ‘tiger-nose grille’. The SP2i would cater to all the needs of the average Indian buyer, say the officials.

Spread over an area of 536 acres and with an annual production capacity of 300,000 units, the Anantapur facility flaunts of world-class amenities and contains a massive investment of over 2 billion USD. The plant had recently started its trial operations in the presence of the Honorable Chief Minister of Andhra Pradesh Shri N. Chandrababu Naidu and Mr Shin Bongkil, Ambassador of the Republic of Korea to India. The ceremony was also attended by Mr Han-Woo Park, President &amp; CEO of Kia Motors Corporation, and Mr Kookhyun Shim, Managing Director and CEO of Kia Motors India. The occasion had also seen Mr Naidu having a test drive of the heavily camouflaged production SP2i. The production facility is hoped to get into full swing by mid-2019.

Kia Motors is the 8th largest manufacturer globally and has more than doubled its global sales since 2008, selling over 2.8 million units last year. The brand also has plans to go electric by 2025 and to launch as many as 16 electric vehicles by then. As per what we have heard from trustworthy sources, the carmaker’s R&D centres in Korea are also working on autonomous mobility solutions, thus staying on par with the rocketing calls for technological advancements.

See how #RafaelNadal and fans enjoy the global tennis festival!
Open up the surprise beyond all expectations at #AusOpen2019 with #Kia

To find out about India’s connection with Australian Open 2019, visit: https://t.co/wtgm4Wjuvr pic.twitter.com/k2fbbO9t8z

Kia has also been interested sports and has been having numerous noteworthy partnerships over time, from FIFA World Cup and Australian Open globally to the likes of the one with Bengaluru Football Club and the principal sponsorship for the Indian Super League 2019, in India.

What happens when you design a car after obsessing over every small detail, you see Kia’s Power to Surprise. Are you ready for Kia? #KiaInIndia pic.twitter.com/k1mTnCnC7T