Power and torque figures remain unchanged, but offers the occupants a much more pronounced wind-in-the-hair experience!

McLaren had earlier set hearts all around the globe pounding faster than ever before with the launch of the 720S Coupe, and now things are getting even more exciting with the official reveal of the 720S Spider, an immensely special gift to the fans straight from the car maker’s Winter Ball.

Well the spider is approximately 18 months younger to its coupe sibling and boasts of a lot more flamboyance with its frameless doors, new rear spoiler programming, and the new Monocage II-S roof, that does away with the coupe’s overhead spine but makes up for the lost rigidity with a set of new Carbon supports. The McLaren 720S Spider is, as should be, a drastic improvement over 650S Spider, the last Super Series roadster. If you could recollect, the 650S had steel supports integrated into its monocage.  Thus switching to Carbon helps the 720S shed over 15 pounds from its rollover protection structure alone! The Monocage II-S doesn’t require any further strengthening  elsewhere and 720S spider retains the slim A pillars and header rail of the coupe.

The 720S spider’s all Carbon fiber hardtop is operated by a new hardtop mechanism that is electrically actuated rather than hydraulically. This too shaves off pounds from the 720S spider along with giving a considerable boost in performance. Now dont you be suprised when we tell you the this spider’s roof can be raised and lowered in just 11 seconds (against the 650S spider’s 17 seconds) and at speeds upto 31 mph (different from the 650’s 18 mph)!

The roof when retracted, fits nicely into the dedicated compartment on the rear end, that offers around 2 sq.foot cubby for luggage with the roof in use. 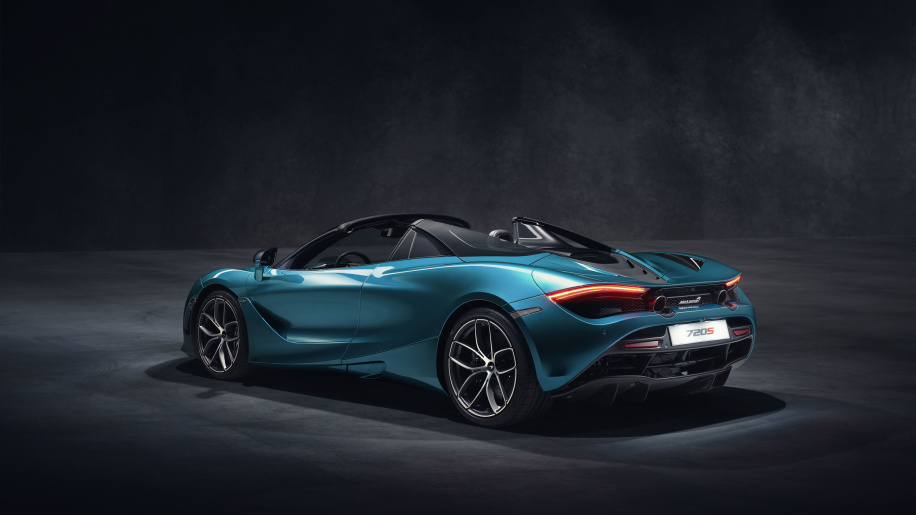 2020 Maybach GLS Revealed: 3 Things To Know About The…

Prominent shards of design brilliance reflects in the rear buttresses that extend from the roll hoops to the fenders and are made of glazed glass. This bit has definitely given the car’s rear three quarter visibility a significant boost.

If you are into extensive sky-gazing, you can also go for an electrochromatic glass roof that tints or goes all clear with the press of a button and tints automatically when the vehicle is turned off.

The power and torque figures of the M840T 4.0-liter twin-turbo V8 hardly gets a tweak in the McLaren 720S spider, with the numbers still sticking on to the familiar 710 hp and 568 pound feet respectively. However there have been significant changes made, to the vehicle’s underflow aero and rear spoiler tuning, all in an effort to cop up with the spider’s different unique airflow pattern. The performance of this spider sees pretty nominal drop in performance, in the range of a tenth of a second in some cases. The 0-60 sprint comes in 2.8 seconds and the speedo tips its max at 212 mph, exact figures that you had gotten to see in the coupe before. The 124 mph run takes 7.9 seconds whereas the quarter mile comes in 10.4s. However having the roof down reflects in the terminal velocity as a puny 10 mph drop.

Available in standard, Performance, and Luxury trims, and with Belize Blue, Aztec Gold and Heritage hue Supernova Silver joining the color palette alongside the 20 inch 10 spoke lightweight wheels, the 720S spider can set you back by around $315,000 !

Jaguar I Pace SUV Bags The ‘German Car of the Year’ (GCOTY) Title !

Safety On The New Jaguar I-Pace Electric SUV Is Incredible !