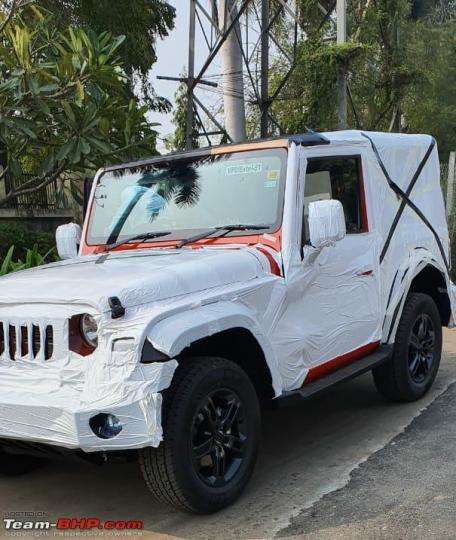 New images have surfaced on the internet which show the production ready Mahindra Thar.

We have all been waiting for the next generation Mahindra Thar for quite a long time now. The all-new Thar had earlier been spotted testing a number of times. What has now emerged on the internet is a picture of the production-ready Thar that shows it being draped in white plastic, something that is usually done before the units are dispatched to the showrooms.

From all the spy shots that had surfaced earlier on the web, we know the next generation Thar to be totally different from the car it replaces. The vehicle had been spotted with various claddings and even a hardtop. The latest picture gives a more lucid clue of the actual design which remains yet to be seen in meat. However, it is evident that the new Thar gets all-new body panels and chassis. In proportions, it will be larger than its predecessor. The overall design will resemble the older model in some key areas as the vertical slats of the grille and the circular headlamps. The picture also shows fender-mounted turn indicator lamps and circular fog lamps.

On the inside, the 2020 Mahindra Thar will have a bunch of exciting new features and equipment. There would be an all-new dashboard that uses modern design cues and some good quality materials. There would also be a touchscreen infotainment system with Apple Carplay and Android Auto on offer as well. The new Thar would also get other modern-day equipment like power-folding wing mirrors, multiple USB ports, digital MID in instrument cluster etc.

Changes on the mechanical front start from the new chassis. The engine options would include a BS6 compliant 2.2 L diesel letting out 140 hp and a new 2.0L TGDi petrol from the Mahindra mStallion family, that would churn 190PS. An automatic transmission is also expected in the new Thar. The 2020 Mahindra Thar would see no compromise in safety as well. The SUV will have dual airbags, ABS, rear parking camera etc. The second row of seats will be front-facing to add to the safety aspect.

The Force Gurkha is the key competitor to the Thar. The Gurkha is as capable an off-roader as the Thar and has similar price tags too. However, the Suzuki Jimny, if offered with AWD, would also compete against the next generation Thar in India.