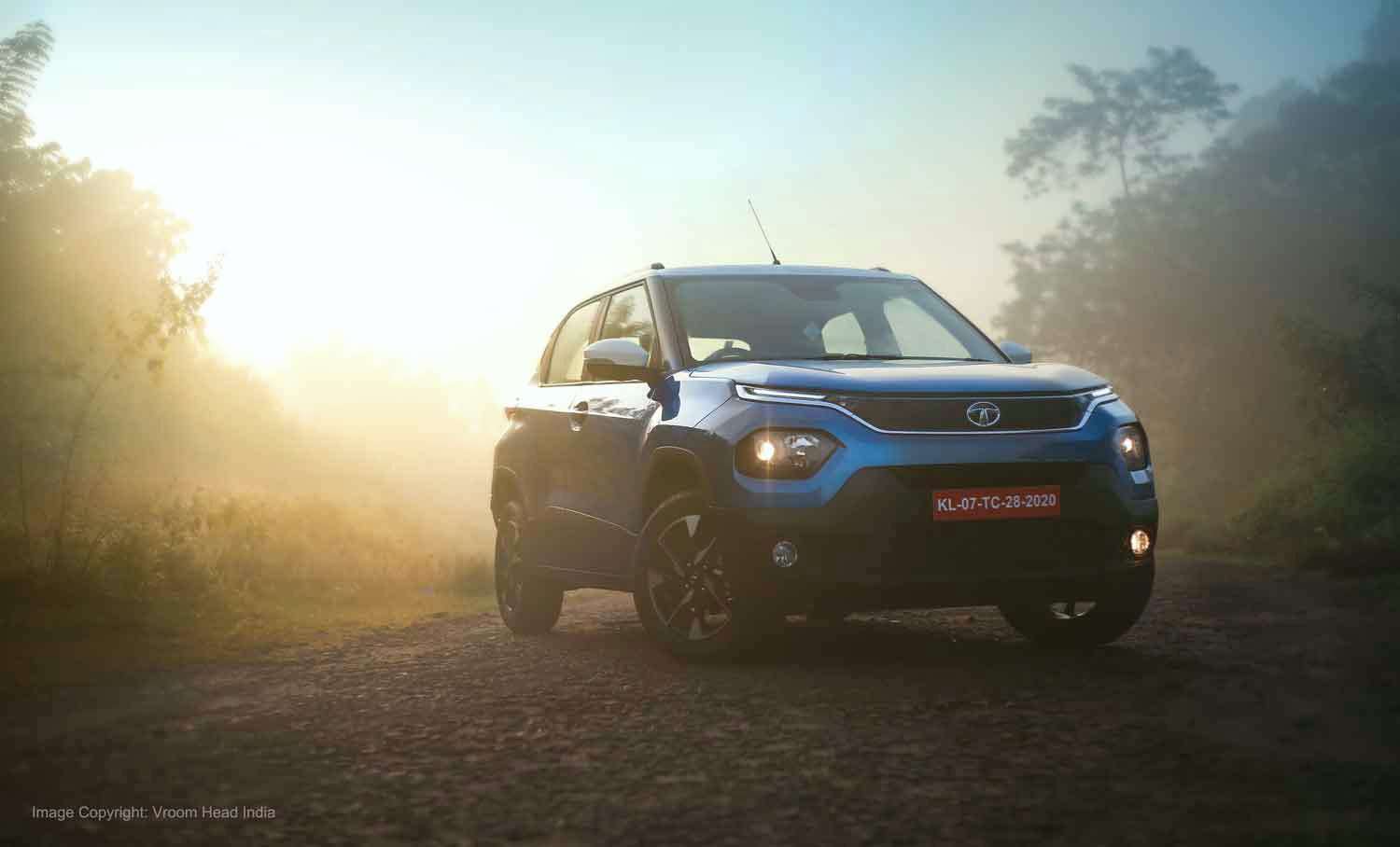 Tata Motors is readying to launch its all-new product-the Tata Punch micro SUV in the Indian market on October 20, 2021. We get to drive one (top-spec Creative persona) prior to this, to know how good or bad it is. Read on to find out our first drive impressions.

As a matter of fact, the Punch stands slightly wider and taller than the Tata Nexon (3993 mm*1811 mm*1606 mm). The length and wheelbase are more on the Nexon. Also, it is the Nexon that has a higher ground clearance of 209 mm.

The Altroz could be considered a worthy sibling to the Punch as both these vehicles share much between them, including the mechanicals. However, in terms of dimensions, The Punch is shorter than the hatchback with a slightly lesser wheelbase. It is, however, significantly wider than the Altroz. You do get to experience this additional room on the inside.

The design is where Tata Motors has its strongest pitch. The Punch is based on Tata’s latest generation IMPACT 2.0 design philosophy. Despite its wee proportions, the Punch looks more or less like the Harrier (or the Safari).

It is the front fascia that has the most resemblance. The Punch looks like a heavily downsized Harrier. (This as a matter of fact, is a strong, straight pitch to the aspirational SUV buyers who already have much respect for these models). The key highlights of the front fascia include a split headlamp design with good looking LED DRLs, a gloss Black fiber grille applique (the actual air intake sits further down) that would instantly remind you of the all-new Nexon, Chrome-clad humanity line, and sculpted front bumpers with prominent tri-arrow elements and fog lamps that get cornering functions.

The grille gets three Tri-arrow ‘cavities’ on it, which the manufacturer says, have the purpose of imparting a sense of exclusivity or adding an X factor to the design. However, I personally am no fan of these, and am sure to soon have company from many of you as well!

The side profile flaunts the SUV- stance of the vehicle. The Punch stands quite tall and high, with an SUV-appropriate design. There is a good 187 mm of ground clearance, something well complemented by the 16-inch diamond-cut alloy wheels. The spare wheel, however, is a 15-inch steel unit. There are a few well-marked body lines on the profile, alongside the Black body cladding and blackened roof rails. The rear door handles sit near the C pillar and the doors as such, open 90 degrees wide, something which we had first seen on the Altroz. The ingress and egress to the rear are thus easy and convenient, despite the relatively small door cavity.

The rear design is quite fresh. You might be able to draw distant visual connections to the Tiago’s or Nexon’s tails. The wrap-around tail lamps get ‘tri-arrow’ shaped LED elements (on the higher trims) inside. The tailgate looks decent and has no sea of badges, but a neatly written ‘PUNCH’.

The rear bumper gets a decent design as well. At 366 liters, the boot capacity is practical and houses a puncture repair kit as well. Apparently, this is offered as an additional safety assurance and does not come at the cost of a spare wheel.

It is quite reassuring that the design essence of the HBX concept has been well carried over to the Punch. Of course, a few tone-downs have happened on the exterior.

A Design That Aids Capabilities

Though pitched as a ‘micro-SUV’, the Punch gets its key design vitals in a way that aids its terrain-handling capabilities and stays true to the ‘SUV’ genre. The approach, departure, and ramp over angles are 20.3, 37.6, and 22.2 degrees respectively, totally befitting an ‘SUV’. The vehicle also has a wading depth of 370 mm.

The overall fit and finish inside are decent. Most of the materials used are of good quality. The textured fiber rib on the dash, however, feels sub-par in quality and visual appeal. You sit quite high inside and enjoy a commanding view around- something very typical of SUVs. Also, the driver and co-driver enjoy a fair view of the bonnet. The upright roof and large windows essentially mean a large glasshouse and lots of light seeping in. This, in turn, infuses an added sense of space in the occupant’s mind.

The infotainment screen and the instrument cluster come straight from the Altroz, and with minimal changes gone into them. The 7-inch touchscreen infotainment system gets Apple CarPlay and Android Auto connectivities, iRA connected car system with OTA and voice command supports. The screen offers good display quality and touch response. The top-spec variant of the punch gets a 6 speaker (4 speakers and 2 tweeters) audio system from Harman, delivering great sound quality.

The instrument cluster is an analog-digital combo (analog speedometer and 7-inch TFT screen) unit borrowed from the Altroz. It gets an identical layout, color theme, and information on offer.

The seats are well designed and have the occupants well-hugged. This could, however, cause slight discomforts to Plus-sized adults. The rear row offers great leg and knee rooms for two. There is also enough headroom for up to 6 footers. Anyone more than 6 ft tall might end up rubbing their heads on the roof. Three people can also be seated without any discomfort, and the mid-occupant would have no discomfort owing to the near-flat transmission tunnel. The rear seat is a single-piece unit and gets a fair-sized armrest and no cup holders, rear AC vents, or USB points.

Punch is underpinned by the new-age ALFA architecture from the Altroz. The polarising body styles of the two- hatchback and SUV built on it, shows the versatility of this platform. This is the second model to be built on the ALFA platform after the Altroz.

The only engine on offer is the familiar 1.2L, 3-cylinder, naturally aspirated, Revotron petrol engine from the Altroz (or more specifically the Tiago), producing 86 hp and 113 Nm. There are no diesel or turbo petrol engines on offer currently. Tata Motors says that they might consider if the demands for these arise. The fact that this platform supports electrification also gives hope of a Punch EV in the years ahead. The NA petrol engine gets a few significant improvements on the Punch, the most important being the Dynapro- Tata-speak for a ram air intake.

There are two transmissions on offer- a 5-speed manual and 5 speed AMT. The AMT gets technical improvements gone into it, that can automatically adapt shifting behaviors to altitudes, or more specifically gradients. The AMT-equipped variant also gets a Traction Pro mode, which strengthens the car’s capability of handling low-traction scenarios.

How Does It Drive?

Though it might seem identical on paper, the actual engine behavior and drivability on the Punch are evidently different. With the Dynapro in place, the engine breathes better. Cooler air is now fed more directly into the engine. This increases the volumetric efficiency and facilitates better combustion. This essentially means that the engine gets an improved power delivery. On the Punch, the low-end torque has improved considerably. You now enjoy a punchier lower rev band and a strong mid-range.

Driving the Punch would not make you feel the engine to be ‘underpowered’ like you would have felt when trying the NA petrol Altroz, apparently due to the improved delivery. The manual transmission offers smoother shifts on the Punch and gets well-set ratios. The car builds up speeds smoothly. 0-100 comes in around 16.5 seconds and you won’t complain. There are two selectable drive modes on offer- Eco and City, with the latter being peppier in response. The engine also gets an Idle Start-Stop system as well, to increase the overall fuel efficiency. Overall refinement levels have also been improved.

The 5 speed AMT continues to offer sluggish shifts. However, the shifting behavior has considerably improved and now offers almost no head-nod during shifts. Overtaking with this needs some time to get used to. There is the option to shift gears manually, but you are not in full control even in the manual mode. The Traction Pro mode is quite efficient in operation, and selectively applies brakes to gain traction in low-traction conditions.

The suspension is on the softer side and the steering feels light at low speeds. However, the electric power steering slightly gains weight with speed and does not let you feel disconnected from the road. The tyres offer decent grip as well. The overall handling is decent for a vehicle of this dimensions and class. That said, this is not a car you would want to push too hard into corners. The raised ground clearance and overall height of the car limit your confidence around corners.

The ride quality is decent. The suspension behaves quite well on all terrains. and there is a good amount of damping as well.

The Punch is a FWD vehicle. However, its approach, departure, and ramp-over angles along with the efficient chassis make it possible to take it to mild terrains and slight off roads. We managed to scratch the underbody just once during our 20-ish minutes of tackling hills, gradients, and boulders. Also, the vehicle is claimed to have 370mm of wading depth, which we did not get to test this time. The Traction Pro mode on the AMT, we can tell you, is no gimmick, but isn’t too strong either. It has its own set of limitations and safe zones.

Tata Punch gets disc brakes at the front and drums at the rear. These offer decent bites and the overall braking performance is good too. The vehicle also gets an innovative technology called ‘Brake Sway Control’ which uses sensors to mitigate and neutralize any instability or movement during hard braking, before the ABS kicks in and brings things under control. This delivers additional confidence to the driver. We managed to test this a couple of times, and at speeds of up to 85 kph, and mostly got reassuring results.

There are four different variants to the Punch. However, Tata Motors has refrained from the usual nomenclature pattern of naming XE, XM, XT, etc, and chosen ‘Personas’ instead- Pure, Adventure, Accomplished and Creative. A possible pun here is the ‘Adventure persona’ name for the lower mid-spec variant. You and I know the Adventure persona as the top-of-the-line variant of the Safari, whereas in the Punch, it is just the second variant’s name. So ‘Punny’!

The Punch doesn’t have a strict rival at present. The only probable names would be the Mahindra KUV 100 (which is currently good as dead) and Maruti Suzuki Ignis (which has distinct differentiation in the overall character). A better competition would arise if Hyundai decides to launch the Casper here. A competitive price tag is what this vehicle needs to sell volumes. Our suggestion would be for the price to start just above the Tiago and end on par with the second variant of Altroz.