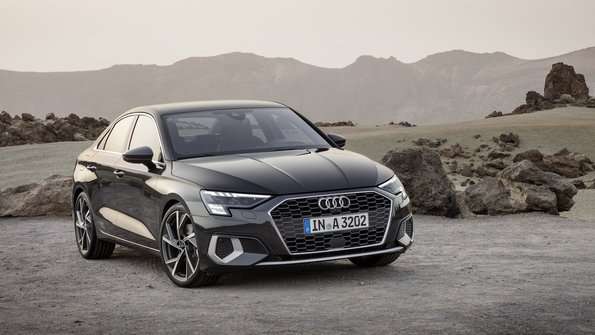 The 2021 Audi A3 gets a slew of upgrades, right from the design to the engines and other technicals

Audi has taken veils off their A3 sedan in its 2021 avatar. The 2021 Audi A3 comes greatly inspired by the recently revealed A3 Sportback, with which it shares quite a bit of its components as well. The overall shape looks coupe-ish to a great extent. Let us now dive deep into the details…

The new Audi A3 is longer, wider and taller than its predecessor and is built on the updated MQB platform from Volkswagen. It is this platform that you would find underpinning the all new VW Golf, and is known for its lightness and rigidity. The bump in dimensions have translated into hikes in headroom and elbow room on the inside, even when the boot space remains the same, at 425 litres.

There are quite a number of vivid design cues for the A3 to boast of. The car now gets a set of magnificent digital LED daytime running lights, which are composed of 15 LED units. The overall shape has become more aerodynamic. There is a large diffuser up th rear, which itself is set quite high. It also gets a controllable cooling air inlet behind the grille, which could be of great use in many a situation.

The cockpit has undergone a thorough revamping in its design and layout. It is now all the more focussed on the driver and gets an air of plushness in it. There are a 10.25-inch instrumentation display and a second 10.1-inch infotainment unit adorning the cabin, both of which are extremely driver-centric. The carmaker, as seen previously in the A3 Sportback, has focussed on keeping the interior design minimalistic, reducing the number of physical controls present inside.

The infotainment system gets the supremely advanced MMI Navigation system, which is way smarter than the one on the car it replaces. You could ask the car any possible SATNAV query and the vehicle would show up with instant responses. The car also features a bunch of connected car features.

Much has changed on the drivetrain and technical fronts as well. The new A3 gets three engine options to boast of- a 1.5L TFSI mill letting out 150PS mated to a quick-shifting 7 speed S Tronic box and with a 48V mild hybrid tech, a second 150PS TFSI mated to 6 speed manual box and a 2.0L TDi diesel mated to 7 Speed S Tronic, churning out 150HP.

It is heard that a 115hp 2.0L diesel and 110hp 1.0L TFSI petrol mills will arrive on a later stage to further enhance the lineup. Much change has happened to the suspension as well. The Audi Drive Select lets the driver choose his favourite tune of the dampers- from sporty to the familiar fuel-efficient ones. This system plays with all vitals of the car like damping, throttle responses, progressive steering etc.

We think that Audi India would bring this model down to our market as a replacement for the A3 sedan that had been on sale here till recent times. If so, we are expecting the new car to be here by mid-2021, which upon launch, would go against the likes of Mercedes Benz A-Class limousine and BMW 2 Series Gran Coupe in the market.