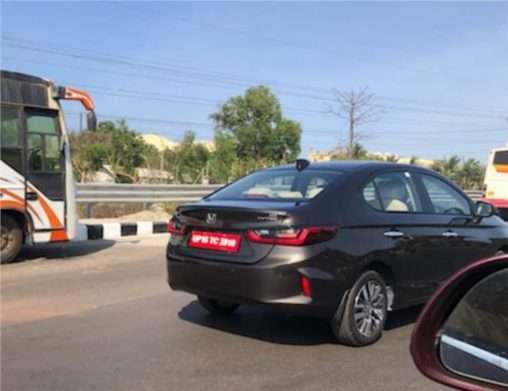 The 2020 Honda City launch that was slated for the coming week, has been postponed to later next month, due to the ongoing COVID-19 Coronavirus attack, and all we have now is this one spy shot from the internet…

We had been waiting eagerly for the 2020 Honda City India launch to happen till recently when the COVID-19 Coronavirus messed the entire thing up. The launch has now been postponed and the media drives rescheduled to the coming month for the fear of the same. However, a picture of the car has now surfaced on the internet, which we first saw on Autocar India, in which the vehicle could be seen being driven on the roads completely undisguised.

As the picture reveals, the new Honda City gets decent styling on the sides and at the rear. The car gets uniquely styled alloy wheels which look way better than those on the one it replaces. The rear, if we would say, now looks younger, cooler and totally befitting for the segment (We personally felt it resembles the upcoming Verna quite a bit at the rear).

The new city is apparently wider than the predecessor and we hope it turns into added space on the inside. The wheelbase has, however, had no change and still tips the scale at 2600mm.

The new City will have a BS6 compliant 1.5L petrol motor and a 1.5L diesel mill, the latter would commence its deliveries much later. It is known that the new city would have the 5-speed manual and a CVT to choose from, on both petrol and the diesel models.

The new City, after launch, will have to take on the likes of the updated Hyundai Verna (which is soon to arrive), the petrol-only Maruti Suzuki Ciaz and the turbo petrol guises of the Volkswagen Vento and Skoda Rapid. However, we assume that the key fight is gonna take place between the Verna and the City. Will the City be able to make it? Fingers crossed…