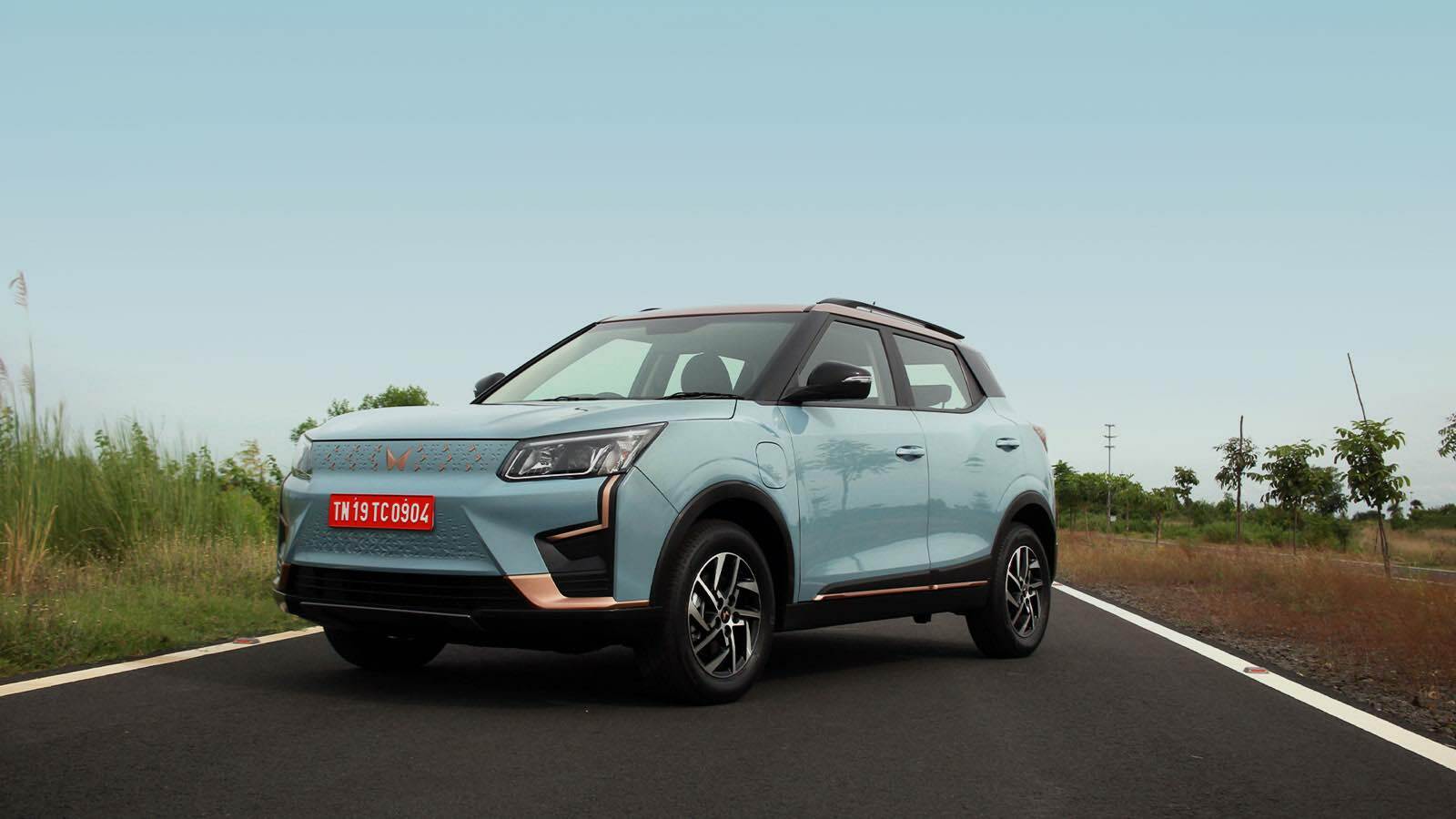 A day and a half after Mahindra unwrapped the XUV 400, we get to drive it on Mahindra’s test track in Chennai- the MSPT. This electric SUV comes with a bunch of interesting claims and numbers to its credit. Buckle up and read on as we are going to explore these in detail…

The XUV 400 is essentially an EV based on the XUV 300 that we’re all familiar with. It is an improvement over the sub-four meter XUV 300 in many areas. Unlike the 300, the 400 is a C-segment SUV, stretching comfortably above the 4 meter mark in length. It could thus lock horns with the Creta, or talking EVs, the pricier MG ZS EV!

Mahindra XUV 400 is considerably larger than the 300. While the wheelbase remains the same 2600 mm, the EV is longer by 205mm, measuring 4200 mm in overall length. The rear overhang is now bigger and the same contributes to the rear room and boot space. Boot capacity here ( measured from floor to roof) is a whole 418 liters! The EV also excels in its width. At 1821mm, it is wider than the Nexon EV twins, outgoing Hyundai Kona, and even the ZS EV!

The overall design would remind you of the 300. However, a lot of elements have been reworked and reshaped. The front fascia now gets a closed-off EV grille with signature arrowhead patterns and the Twin Peaks logo in Bronze, fresh-looking bumpers, headlamps that look almost similar to the ones on the ICE vehicle but with different DRL designs, and multiple Copper garnishes. Touches of Copper can be seen in multiple places from bumpers to the roof and the dashboard- something that highlights the EV genes well.

The profile looks almost identical to the XUV 300. The 16-inch wheels get 205/65 Bridgestone rubber. The most obvious when viewed from the side would be the size. The bigger rear overhang and increase in overall length will strike you quickly. The LED tail lamps retain their familiar shape but now feature new, deeper detailing. The rear bumper gets a slightly better design on the EV. The overall design could be called a mature evolution of that of the eXUV300 concept.

The electric XUV 400 is available in a total of five colors– Napoli Black, Everest White, Galaxy Grey, Arctic Blue, and Infinity Blue. There is also the option to have dual-tone colorways with the roof painted in Copper.

The overall design and layout of the XUV 400’s cabin would all look familiar (Period relevant? Hardly!). However, unlike the 300 pleasant cabin tones, the EV gets it in Black. You get to see Copper garnishes and inserts inside too- on the volume knob, around the AC vents, and more. Gloss Black inserts on the dash and the steering are new. Almost all the switchgear remains unchanged, but the drive selector joystick is something we particularly like on the XUV 400. Looking much like the ones you see on high-end luxury cars, this lets you toggle between drive modes with ease- Park, Neutral, Reverse, Drive, and Lively (P,R,N,D,L) ‘Lively’ is what Mahindra likes to call the single pedal drive mode on the electric XUV.

Many features from the XUV 300 make their way to the EV as well. You get things like a single pane sunroof, cruise control, and the familiar 7-inch touchscreen that now runs AdrenoX entertainment engine. The overall audio quality seemed decent (not anywhere near the Sony units on the XUV700 and Scorpio N though!), and the interface felt fairly responsive. However, the screen here is rather reflective and the same bothered slightly under the sun! A few key misses on the equipment front include dual-zone climate control, rear AC vents, front parking sensors, etc.

The seats feel comfortable and offer decent support. Bigger vehicle dimensions seem to have generated slightly more room at the rear. The class-leading width makes it possible for three people to sit comfortably at the rear. However, a limited number of storage spaces could still be a concern.

The instrument cluster comes almost unchanged from the ICE car, and is honestly, not the most up-to-date setup today. The analog-digital combination cluster, however, is functional. The central MID delivers multiple EV-spec information like charge, range, power mode, drive mode, and more. The readability and layout of these could still be improved.

XUV 400 is built on the XUV 300’s platform. The Ssangyong-sourced architecture has been thoroughly reinforced and restructured for more structural rigidity and improved crash safety with the electric powertrain in place. Talking of the powertrain, XUV 400 gets a 39.4 kWh battery pack and a 110 kW electric motor mounted on the front axle. This setup churns out 150 hp and 310 Nm. The NMC battery pack, as they reveal, is sourced from LG Chem, Korea. The motor and power electronics are sourced from Valeo.

There are three different power modes (or drive modes) to the XUV 400- Fun, Fast, and Fearless (I’m amused by the names Mahindra gives to the tech on its vehicles. Remember the Zip, Zap, Zoom on XUV 700?) The Fearless lets you access the full performance of the powertrain. But even the base-mode: FUN is no sloth, despite having a very strong regen! These modes alter the throttle response, regen, and steering to deliver optimum driving experiences.

XUV 400 is extremely fun to drive. In the ‘Fearless’ mode when the full capability of the powertrain is accessed, this electric SUV does 0-100 kph in just 8.3 seconds. That is faster than all its competitors. In fact, the 400 is a touch quicker than the MG ZS EV which takes 8.5 seconds for the same, despite belonging to a higher segment. XUV 400 could thus be:

One thing to like about the performance here is the consistency with which you can access the peak torque. Going by the time we spent doing high-speed sorties with the 400, the powertrain seems to have a very efficient thermal management system to it. The ‘mountain’ of torque can be accessed comfortably for longer spans of time. 150 kph remains the top speed of the XUV 400. However, on the straights of Mahindra’s high speed test track, we managed to clock (indicated) 155+ kph.

This is the next big thing. The new XUV 400 gets suspension tech that we’ve seen and loved on other modern-day Mahindras- MTV-CL (Multi-tuned Valve Central Land) and FDD (Frequency Dependent Damping)- a setup that we had loved on the XUV 700 and Scorpio-N, but in a very different form, fine-tuned for the smaller electric XUV. You get to enjoy great dynamics on this EV, backed well by its well-set steering and suspension setups. In terms of ride quality, I find this to be fairly convincing. The suspension gives no hard ride. There is enough comfort offered on both rows at most times.

This electric SUV excels with its NVH levels. It lacks all those high whines and hums we expect from other EVs of this class. The motor has minimal hums and whines even when pushed hard. The thermal management system is slightly audible from outside, but never inside the cabin! The insulation on XUV 400 is so impressive that it cancels out all the wind, tyre, and powertrain (if any) noises and delivers absolute peace inside. Definitely better than all its rivals.

Mahindra XUV 400 electric SUV is claimed to return an MIDC range of 456 km per charge. This could be the highest in its class. But will it? Well, the 400 weighs 1578 kilograms, and with all that performance and the NMC532 battery pack in place- which uses older chemistry and is less efficient than modern-day batteries- it remains to be seen if the car will live up to the claims. We can’t give a more authentic thought on this now, as we are yet to put this EV to a proper range test. However, the XUV 400 can be charged from 0-80% in just 50 minutes over a 50 kW fast charger.

Mahindra has given a Single pedal driving mode to the electric XUV- Lively Mode (Another million dollar name there!) This uses aggressive regen to slow down the vehicle and bring it to a complete halt, without using brakes. In our test course, it worked really well and was quite likable. The recuperation here could fairly add to the range.