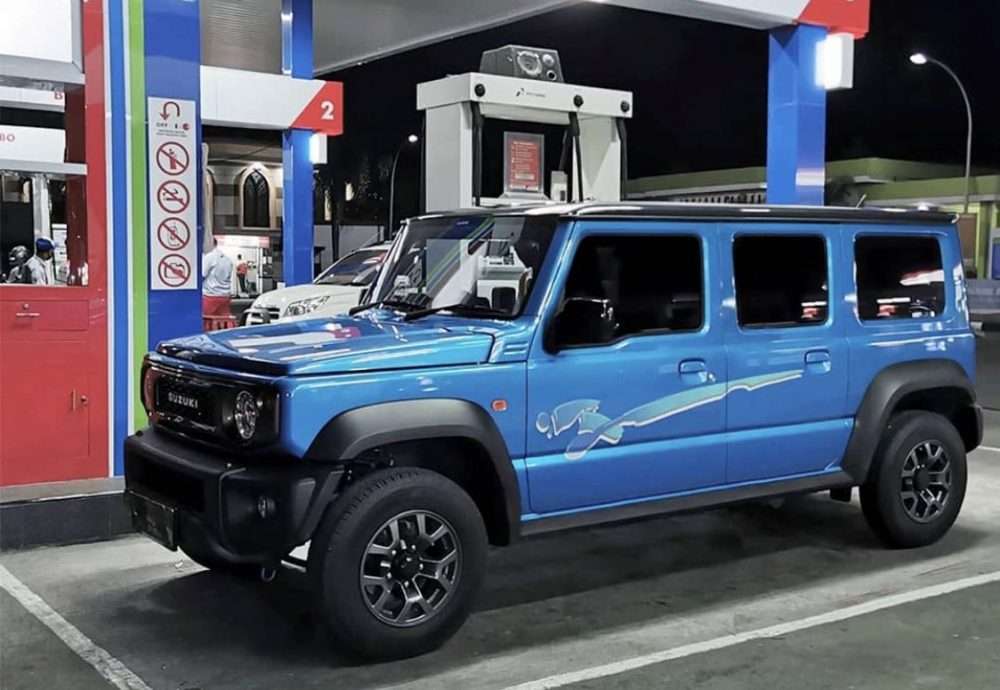 We ain’t kidding at all! Take a look at these digitally rendered images of the 5-door Suzuki Jimny that have surfaced on the internet if you still don’t believe us!

India needs no introduction to the Suzuki Jimny. You and I have been following the news and stories of this minuscule SUV with as much vigour as what we had followed the beloved Maruti Gypsy with. Maruti Suzuki India has taken our hopes for the Jimny further up by showcasing the car at the Auto Expo 2020 as well, hinting at an imminent India debut.

Moving further ahead in time, we happened to hear news of Suzuki readying the Jimny in a 5 door layout as opposed to the global 3 door model. We heard it from sources so trustworthy that one cannot merely discard them for mere rumours. We at Vroom Head India were too taken aback by the idea of a 5-door Jimny. A car that is known for its compactness induced capabilities going ‘Limo’, Like Seriously?!

But then we stumbled upon these digital renderings of a 5 door Mk4 Suzuki Jimny on the internet, and honestly speaking, they have me impressed! These computer renderings from Japan show a Jimny that has been stretched out magnificently and resembles the mighty Hummer to a great extent in its looks! With stout SUV stance and the added wheelbase, the car in the pictures does look like a ‘Minified Hummer’ (quoting our developer here !) The pronounced wheel arches and the squared rear quarter glasses further strengthen this feel.

While the kit and design cues of the renders may not make their ways into production, we do know that the 5 door Maruti Suzuki Jimny, or the Mk4 Maruti Gypsy as we Indians might better relate, would be over 4000 mm in length. It will be manufactured at the carmaker’s facility in Gujarat and time still remains before we have a clear clue on if it would be dubbed Suzuki Jimny or the all-new Maruti Gypsy in India.

The India-spec Jimny would borrow the K15B 1.5L four-cylinder petrol engine of its global counterpart. Capable of putting out 102PS and 130Nm, this mill might come mated to a 5-speed manual and 4-speed automatic transmission options.

The Jimny is globally acclaimed for its breath-taking offroading capabilities. The compact size and timid proportions along with the capable AWD and associated mechanicals have gained it great name among enthusiasts. But, if Maruti Suzuki is to bring in a 5 door version of the SUV to India, it would most likely lose the AWD and would come in as regular 2WD models alone.

Maruti Suzuki plans to launch the Jimny here in November and retail it via the premium Nexa dealerships. We expect the official Maruti Suzuki Jimny price in India to fall somewhere around the INR 10 lakh mark.

To sum it up, we have no lucid clue of the 5 door Jimny’s design cues yet, but if it is somehow the same as the one in these pictures, I would definitely buy my wife one and yell “Honey, I shrunk the Humvee”

ALSO READ: Maruti Suzuki Jimny To Have A Larger 5 Door Layout In India