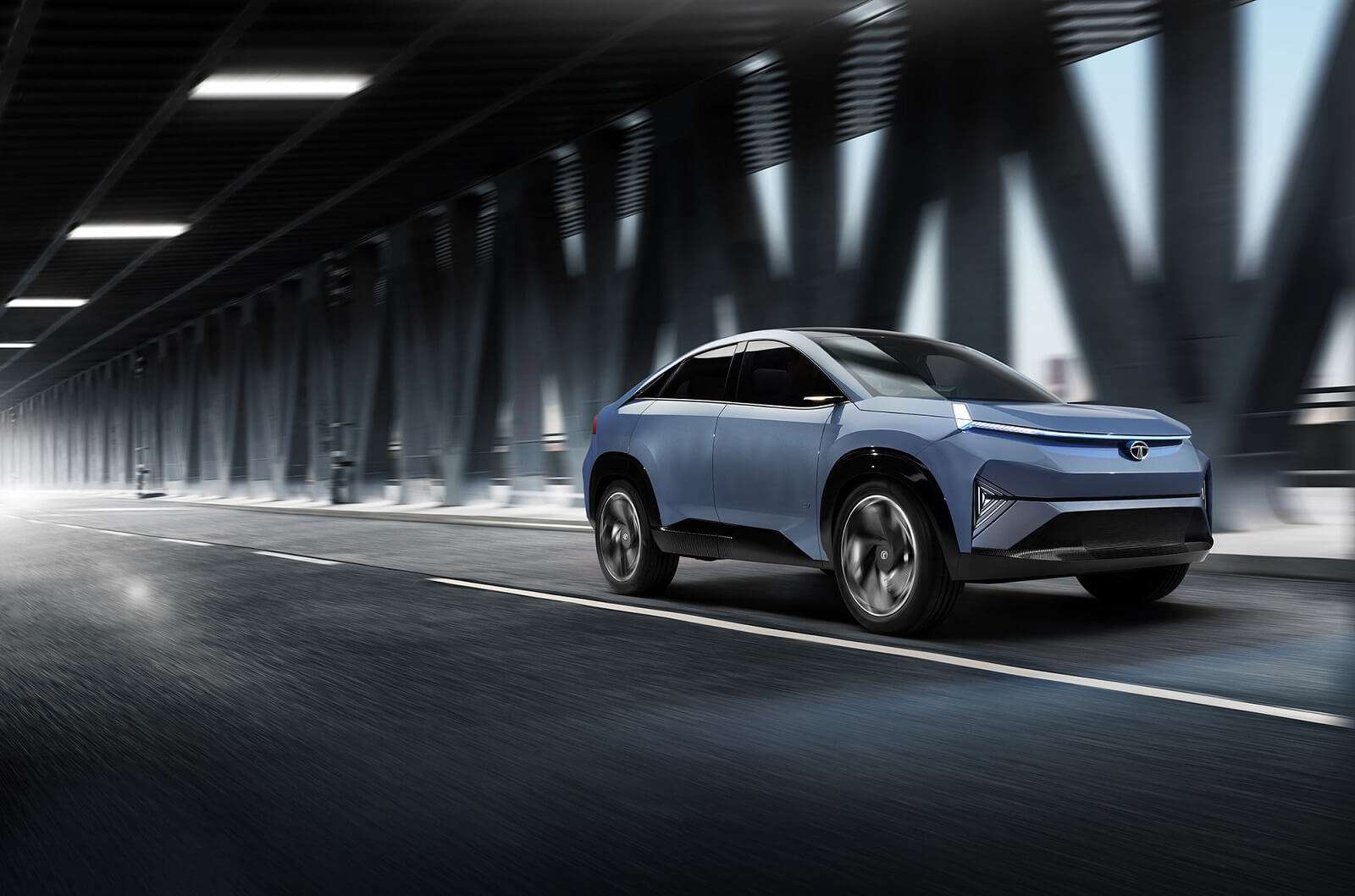 Up close with Tata Curvv’s design and cabin…

Tata Curvv EV has been unboxed with a design that would run straight into your eyes! The coupe SUV would come with an all-electric powertrain and pleasant cabin. We have already talked in detail about the Curvv, its expected specifications, and launch plans in a previous story. Curvv is like no other Tatas we have seen to date, and is no boring set of lines to look at! Diving deeper into the design in a while…

Look at it and you will instantly notice the concept’s design to be edgy and striking. It has neat surfaces but with loud edges and strong angles. There are no major ‘curves’ to be seen anywhere on the exterior. Then why the name Curvv? We asked them and the folks at Tata came up with this very interesting explanation:

Tata Motors has been leading the EV game in the country, and had themselves set the EV trends here. Take a walk back and you will also find that it was Tata motors who had started the SUV game in India, through the Sierra and OG Safari. The manufacturer is striving to keep the title of being the trend setter safe, by ‘always staying ahead of the curve’. The Curvv concept is expected to pioneer the coupe SUV game here (But will it? Remember the Renault Arkana that was recently spotted testing? Well…). Tata thus hopes to beat the current curve of ‘electric SUV buyers’ with the Curvv! Well, not a bad storyline indeed…

Before any further deconstruction, let me shout it out loud- The Curvv looks stunning! There are enough cues in the various areas of its exterior design to impart the unmistakable image of an EV in the beholder’s mind. Thanks to its smooth surfaces, evident light guides and the various angular elements!

Though the sources haven’t issued any official statement on it yet, the Curvv is built on a heavily reworked version of the Harrier’s platform. It is thus larger than a Nexon and almost the size of a Harrier. However, a lot has changed about this architecture, which we would talk about in a while.

Tata Curvv is based on the new ‘Less is More’ design philosophy which in flesh, looks like an obvious evolution of the Harrier’s Impact 2.0. Its ‘SUV coupe’ bodystyle renders both visual and aerodynamic advantages to the concept. The exterior design features multiple instances of angular lines and loud edges. The bonnet looks smooth and imposing. An LED light guide ( or a light bar) runs along the width of the bonnet, imparting a loud EV character to the front design. The DRLs get a new sleek, angular design and also double as turn indicators. The front light bar also features an animated ‘welcome’ function, with which the lights would play around in a pleasing way as one approaches the car. Remember seeing this on some fancy electric sports cars?

At where the headlamps would sit on modern Tata SUVs, the Curvv concept has powerful triangular LED elements. Look closely and you would see some amount of the Sierra EV in certain areas of the front design!

The most notable highlight on the side profile is the smooth, sloping coupe roofline. It gels in well with the rest of the design. We have loved modern day SUV coupes like the BMW X4, Audi E Tron Sportback, and Mercedes GLE coupe for the visual pleasure offered by their roofs. The Curvv is no different and looks lovely when viewed from the sides. If one draws visual connections between this roof design and that of the Tigor, don’t be surprised. Tata Tigor I would say, had the most underrated roof designs of its time. It looked almost like a coupe, a visual trait which very few went vocal about!

The concept’s wheels are also designed in an aerodynamic manner. They look good and are claimed to provide slight aero advantages as well. Building aero-efficient wheel designs is a common practice in the EV space these days. We had recently seen something similar on the MG ZS EV facelift as well. The finishing touch on the Curvv’s side-design would be the mirrors which are a pair of sleek cameras on the concept. On the production form however, these would mostly be ditched for regular glass units.

The rear design is brilliant! This could be the best angle to view the Curvv from, for maximum aesthetics. The boot design reflects the car’s SUV-spec ground clearance well and looks neat with smooth surfaces and angular lines. The rear bumper design too is catchy. The most magnificent bit here would be the rear lighting. The LED Tail lamps feature a slightly swept-down design (which might even remind you of the Lamborghini Huracan‘s at times, erm, let’s not go that far!) These sit at either corner of the shell and are connected by a beautiful light guide. These light bars are currently gaining great acceptance in the EV space. However, on the Curvv, Tata Motors takes this a step or two ahead, by giving a second lighting element around the rear windshield. While this might sound cool to many, my tastes prefer to disagree on the most personal note!

Thoughts On The Interior Design

The concept has its cabin design reimagined to the same extent as the body shell. The interior looks fresh and has generous use of premium trims and materials in it. There are multiple touch surfaces across the dashboard and central pane. Unlike the outgoing models, the Curvv gets two neat, fair-sized screens for its instrumentation and infotainment, thereby eliminating the ‘clutter and fuss’ that some of the present-day cars host inside. Tata says that this infotainment system will have an increased focus on connected car features and their efficiencies. The climate control has Haptic Touch controls for all its functions. The car also features a large panoramic glass roof. However, we will have to wait for the final form to know the extent of impact the coupe roofline would have on the rear row space and usability.

The concept features a two-spoke steering wheel design, which Tata confirms to be their signature wheel design for the years ahead. (It feels great to see two spokes get trending again. Always loved the recent Skodas for those!) The flat-bottom wheel makes decent use of touch surfaces in its design, has just two physical controls and haptics for the rest, and looks great with the illuminated Tata logo.

The interior design feels pleasant and should be noted for the colorway chosen, materials used and the design directions embarked on.

Courtesy of its Gen 2 architecture, the Curvv can accommodate larger battery packs that can offer range of 400-500 kilometers per charge. The battery packs would have faster charging times than what we are used to on the Nexon EV, on both AC and DC chargers. The SUV coupe would have a single motor setup- or in other words, a front wheel drive layout. However, a dual motor AWD could also launch in the future depending on market demands. Interestingly, production-spec Curvv would also have selectable levels to its regen, which is also known to get more powerful than what’s on offer on outgoing Tata EVs.